A bunion is a bump that forms at the base of the big toe. Bunions form when the big toe pushes against the next toe, which forces the big toe joint to get bigger and stick out.  As a result, the skin over the bunion may start to appear red and it may feel sore.

There are risk factors that can increase your chances of developing bunions. People who wear high heels or ill-fitting shoes are more likely to develop them, in addition to those who have a genetic history of bunions or have rheumatoid arthritis.

The most obvious way to tell if you have a bunion is to look for the big toe pushing up against the toe next to it. Bunions produce a large protrusion at the base of the big toe and may or may not cause pain. Other symptoms are redness, swelling, and restricted movement of the big toe if you have arthritis.

Nonsurgical methods are frequently used to treat bunions that aren’t severe. Some methods of nonsurgical treatment are orthotics, icing and resting the foot, taping the foot, and pain medication. Surgery is usually only required in extreme cases. However, if surgery is needed, some procedures may involve removing the swollen tissue from around the big toe joint, straightening the big toe by removing part of the bone, or joining the bones of your affected joint permanently.

Your podiatrist will diagnose your bunion by doing a thorough examination of your foot. He or she may also conduct an x-ray to determine the cause of the bunion and its severity.

Ingrown toenails (onychocryptosis) are a common foot ailment and it is very unpleasant to experience. The condition is caused by an increase in pressure from the ingrowth of the nail edge into the skin of the toe. Ingrown toenails commonly cause pain in those who experience them. In some cases, the skin surrounding the ingrown toenail may break which may lead bacteria to enter through and cause an infection. Common symptoms of this ailment include pain, redness, swelling, and warmth around the toe.

An imbalance between the size of the nail and the enlargement of the nail skin edge causes ingrown toenails. This condition is often caused by improperly trimming the toenails. If you are trying you cut your nails, you should always try to trim straight across instead of in a rounded shape. Ingrown toenails can also be an inherited condition and they may also be caused by improper shoe fitting.

Another common cause of the condition is wearing shoes that are either too small or too large. Other causes include poor foot hygiene, obesity, diabetes, arthritis, edema, and fungal infections. There are many risk factors that may make a person more likely to develop an ingrown toenail. Athletes who play “stop and start” sports such as tennis, soccer, and basketball are most likely to have ingrown toenails.

People who have diabetes, a compromised immune system, or poor circulation should immediately seek care from a podiatrist if they have an ingrown toenail. It is also recommended to seek professional assistance if at-home remedies are not successful within a week or if there is persistent pain.

Effect of High Heels on the Feet

For hundreds of years, women have been wearing various kinds of high heels for aesthetic reasons. Women who wear high heels appear to be taller and have longer and thinner legs, and the wearer’s gait and posture changes. Though high heels have had an association with femininity and have kept them popular over the years, there are definite health problems caused by wearing them too frequently.

The motion of the ankle joints is limited when heels are worn. The ankle joint is very important to the body when it comes to walking. Because of their location, these joints have a great deal of weight put on them. Thus, it is very important to keep them as healthy as possible. The Achilles tendon is the main tendon in the ankle. Wearing high heels too often, studies have shown, can cause the calf muscle and Achilles tendon to shorten and stiffen. This can cause problems when shoes without heels are worn.

By putting a great deal of pressure on the ball of the foot and by forcing the toes into a small toe box, high heels can cause or may worsen many foot problems. These include corns, hammertoe, bunions, Morton’s neuroma and plantar fasciitis.

Not only does wearing high heels regularly have negative effects on the feet, the rest of the body can suffer as well. The knees, one of the most important joints in the entire body, can be affected by wearing high heels.  High heels can cause the knees to stay bent all the time. Also, it can cause them to bend slightly inward as well. Doctors believe that women can suffer from osteoarthritis later in life because of constantly walking like in high heels. By limiting the natural motion of the foot during walking, high heels also cause an increased in stress on the knees.

Similarly, high heels can cause the back to go out of alignment. If high heels are worn constantly, the spine’s ability to absorb shock can cause continued back pain. They can compress the vertebrae of the lower back, and can overuse the back muscles.

However, this is not to say that high heels can never be worn. If worn occasionally and not often, they will not cause serious problems. They should not be worn every day. It’s important to wear them modestly to avoid the long-term physical health problems of the feet, knees, ankles, and back mentioned above.

Athlete’s foot is an extremely contagious infection caused by a fungus that results in itching, burning, dry, and flaking feet. The fungus that causes athlete’s foot is known as tinea pedis and thrives in moist, dark areas such as shower floors, gyms, socks and shoes, commons areas, public changing areas, bathrooms, dormitory style houses, locker rooms, and public swimming pools. Athlete’s foot is difficult to treat as well because of the highly contagious and recurrent nature of the fungus.

Tinea is the same fungus that causes ringworm, and is spread by direct contact with an infected body part, contaminated clothing, or by touching other objects and body parts that have been exposed to the fungus. Because the feet are an ideal place for tinea to grow and spread, this is the most commonly affected area.  It is, however, known to grow in other places. The term athlete’s foot describes tinea that grows strictly on the feet.

The most commonly infected body parts are the hands, groin, and scalp, as well as the feet. Around 70% of the population suffer from tinea infections at some point in their lives, however not all of these cases are athlete’s foot. Just like any other ailment, some people are more likely to get it than others, such as people with a history of tinea infections or other skin infections, both recurring and non-recurring ones. The extent to which a person experiences regrowth and recurrent tinea infections varies from person to person.

Sometimes people will not even know that they are infected with tinea or that they have athlete’s foot because of a lack of symptoms. However, most experience mild to moderate flaking, itching, redness, and burning. However, some of the more severe symptoms include cracking and bleeding skin, intense itching and burning, pain while walking or standing, and even blistering.

Because of the recurring nature of the tinea fungus and the athlete’s foot it causes, the best way to treat this condition is with prevention. You can take some preventative measures such as wearing flip flops or sandals in locker rooms and public showers to reduce contact with the floor. It also helps to keep clean, dry feet while allowing them to breathe. Using powders to keep your feet dry is a good idea, as well as keeping your feet exposed to light and cool air, to prevent the growth of tinea. If you do happen to get athlete’s foot, opt for using topical medicated creams, ointments or sprays. These treatments help eliminate and prevent it from coming back.

Heel pain can be due to a multitude of conditions including plantar fasciitis, Achilles tendinitis, and heel spurs. Pain experienced in the ankle can be a sign of an ankle sprain, arthritis, gout, ankle instability, ankle fracture, or nerve compression. In more serious cases, pain in the foot can be a sign of improper alignment or an infection.

Foot pain can be accompanied by symptoms including redness, swelling, stiffness and warmth in the affected area. Whether the pain can be described as sharp or dull depends on the foot condition behind it. It is important to visit your local podiatrist if your foot pain and its accompanying symptoms persist and do not improve over time.

Depending on the location and condition of your foot pain, your podiatrist may prescribe certain treatments. These treatments can include but are not limited to prescription or over-the-counter drugs and medications, certain therapies, cortisone injections, or surgery.

If you are experiencing persistent foot pain, it is important to consult with your foot and ankle doctor to determine the cause and location. He or she will then prescribe the best treatment for you. While milder cases of foot pain may respond well to rest and at-home treatments, more serious cases may take some time to fully recover. 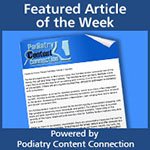